What is often overlooked, for example, is indirect factory labour. This occurs when labour recorded above the accounting Gross Profit line is not insured and labour below this line is. For all the reasons mentioned above, today’s production staff is typically highly skilled staff, who take time and money to replace. This certainly is the case for indirect labour such as supervisors, maintenance staff, etc. From my experience, indirect factory labour should be insured.

This is a method of partially overcoming the disadvantages discussed in Section 8.10. This option is to insure non-essential staff for short periods to cover short-term losses, and/or then cover the cost of redundancy should the disruption be for an extended period. To insure this correctly, you need to identify and clearly advise the Insurer in advance of the Specific Categories of worker that are to be insured or not insured, and then calculate the Sum Insured for each category. Insuring only essential staff alone, or combining it with a shorter cover for non-essential staff, does require additional care by management. Just who is and who is not essential staff needs to be constantly challenged to ensure that those essential to the business are insured. Points to consider are:

Particularly for small- to medium-sized businesses, by the time you do all this and calculate the total Sum Insured required, the difference between the premium for this reduced cover and that for total cover is so insignificant that it is not worth the effort or the risk not to insure fully.

INSURING ONLY A PERCENTAGE OF WAGES

Rather than define who are essential staff, another method of insuring wages that has been adopted is to insure only a percentage of wages for the Indemnity Period. For example, 15% of wages are insured as part of the Insured Rate of Gross Profit. This means that the remaining 85% of the wages expense is not insured from day one, regardless of whether the disruption is minor or extended. This exposes the business to a major risk, and is only marginally better than not insuring wages at all. It invariably means that part of the wages expense is the Insured’s responsibility. To minimise the uninsured loss, the Insured needs to make decisions to dismiss or stand-down staff as quickly as possible after the loss. Quite often, all the facts are not known and a decision is made too quickly, with long-term adverse effects to the business. Invariably, the percentage of wages insured is low and, as a result, either the uninsured loss is significant or the Insured is forced to stand-down so many of their staff that it delays the recovery of the business. From my experience, any benefit in savings in premium is far outweighed by the extra burden placed on the cash flows of the business, and the management stress it causes in the event of a loss.

To overcome some of the disadvantages of partially insuring Wages in one of the ways mentioned above, a hybrid form of Wages insurance was developed, called ‘Dual Wages’. Wages are insured 100% for the first period, say 12 weeks. Then for the balance of the Indemnity Period, wages are only partially insured, eg. 40% of wages may be covered for 40 weeks.

This cover provides an “Option to Consolidate” . In theory, you get the best of both worlds.

Figure 1 – The Option to Consolidate

In Figure 1 above, the shaded area shows the basic option of an initial 12-weeks total cover, as well as 40% cover on wages for the remainder of the 52-week Indemnity Period. The bold outline shows that the two sets of cover can be consolidated to 28 weeks of 100% wages cover.The cover is more flexible than this as it allows for savings in wages from the first period, to be carried forward to any time during the second period to better meet the demand for labour in the business, following an insured loss. This is again explained in graphical form in Figure 2 overleaf. 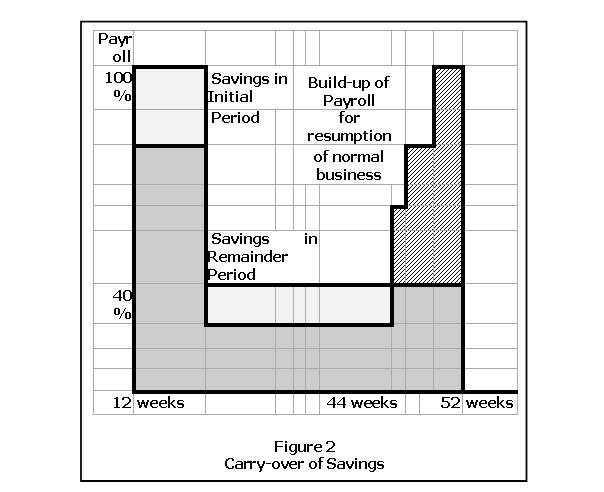 Carry-over of Savings The basic option is shown as the 12-weeks total cover and a 40% limit from the 13th to the 52nd weeks. However, the savings made in the first 12 weeks and indeed any savings up to the 44th week in this example, are carried forward for use in weeks 45 to 52, to allow for the resumption of normal trading. These savings in the first 44 weeks, and additional payments in the last 8 weeks, are shown by the diagonally slashed area. It is stressed that in the event of a loss, the decision on which way the claim is presented is at the discretion of the Insured, not the Insurer.

It is indeed flexible, however it does have its limitations, particularly when the cover is sold without any real thought to the actual labour requirements of the business. So often, cover is arranged for 100% for 4 weeks and then 10% or 15% thereafter. This does not allow anywhere near enough flexibility in most claims. Firstly, 4 weeks is never enough time to determine future employment needs, and then implement the strategy by retrenchment and stand-downs. Secondly, few businesses could hope to operate with such a small percentage of their labour force. Finally, a low percentage Wages cover for the second or Remainder Period means the Option to Consolidate period is shortened. Therefore, even disruptions for short periods of say 13 weeks (3 months) may not be covered in full.

In practice, this minimalist cover of 100% for 4 weeks and then a small percentage thereafter, is completely inadequate in all but the very shortest of disruptions.

There is a place for Dual Wages insurance, particularly with larger businesses or in organisations where there is a high percentage of unskilled and/or casual labour. However, it does require someone who truly understands the product to determine the level of cover required. Again, it is stressed that no two businesses are the same and any Insurance Broker, Agent or Insurance Representative who always sells Dual Wages with the same length of Initial Period and percentage coverage for the remainder of the Indemnity Period is not doing his or her client, or themselves, any service.

The calculation of a claim under Dual Wages is a very complex exercise. Chapter 9 works through an example, comparing the options available and claiming what is most advantageous to the Insured.

Rather than insure wages, some opt to only insure severance pay. The cover does not provide any protection to the Insured for the accrued benefits payable to an employee such as holiday pay, sick pay, long service etc. These expenses have been accrued in view of the employment of the staff member before the loss. What the cover does provide is the payment in lieu of notice, payable to a staff member if they were retrenched in the event of a loss.

In some cases, this cover is combined with a Dual Wages cover. It is my recommendation that this combination not be taken in every case. To obtain greater flexibility for the same premium, either the Initial Period should be extended, or the percentage of Wages for the Remainder Period should be increased. This then allows the Insured greater flexibility in the event of a loss.

Severance pay can still be paid and claimed as part of a Dual Wages claim. The savings in Wages from the date of the dismissal would typically be greater than the severance pay. Therefore, the Insurer would meet the cost as the overall benefit, ie. the amount paid under the claim would be less than if the staff member were retained. This does require the decision on whether to retain or dismiss staff, to be taken relatively early after the loss to achieve the savings. It would not be of benefit if the staff were retained for three months and then let go.

The benefit to the Insured is that the insurance cover can be claimed as a Wages claim if the staff are retained. Another benefit is that the option to consolidate period is longer, thereby giving greater cover for short-term disruptions. If severance pay is being considered, whether it be to insure separately or when considering the Initial Period under a Dual Wages cover, the average length of employment for the company’s workforce needs to be considered. Another consideration is the awards that may apply to the retrenchment of staff.

In this chapter, several ways of insuring wages were considered, and the benefits and disadvantages of each were discussed. The methods considered were:

It was explained that the only way to fully protect a business against one of the greatest ongoing expenses of any organisation, is to insure wages 100% as a part of Insured Gross Profit. This cover also provides the Insured with the most flexibility in the event of a loss.

The basic principle of Dual Wages was explained. It was also demonstrated how it was possible to obtain more flexibility with the cover for the same premium, rather than have additional severance pay cover.

The next chapter, Chapter 9, works through an example of how a claim is calculated in the event of an insured loss under a Dual Wages cover.

The only way to provide a company with all the flexibility possible is to insure Wages 100%. It can be left as part of the Insured Gross Profit Sum Insured. Your insurance broker, adviser or agent should be able to provide detailed advice to you.